. time to party with the town’s most exclusive party . 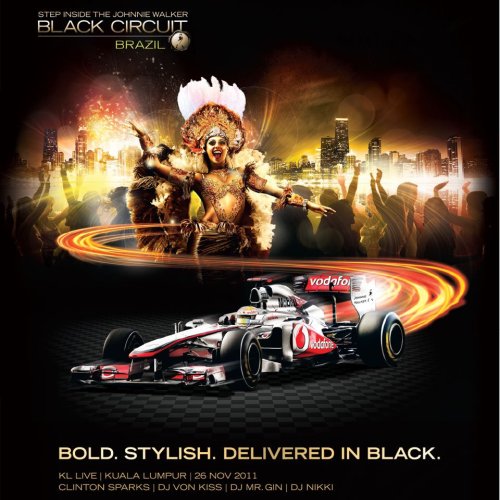 This weekend, the world’s leading Scotch whisky – JOHNNIE WALKER -celebrates the end of the F1 season with a Brazilian twist to the ultimate VIP race party experience! As part of the JOHNNIE WALKER Step Inside the Black Circuit Campaign to give party-goers an inside look into the stylish and sophisticated world of motor racing, this exclusive and highly anticipated event will take place on Saturday, 26th November at the renovated KL Live in the heart of downtown Kuala Lumpur, and will be infused with the pulsating energy and glamour of Brazil.

Get ready to dance to the latest heart-pumping hits from the stellar line-up of world-renowned DJs like Clinton Sparks (USA), Von Kiss (South America), Mr. Gin (Taiwan) and Nikki (Malaysia).

Sights of our Green Corridor walk from Queenstown to Buona Vista 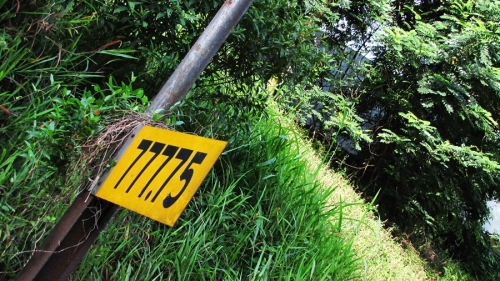 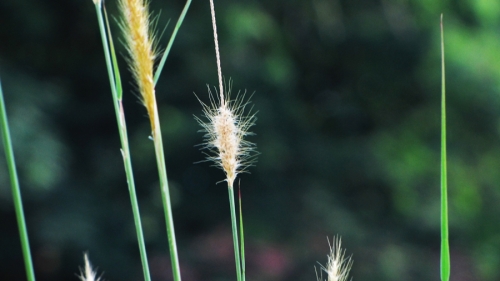 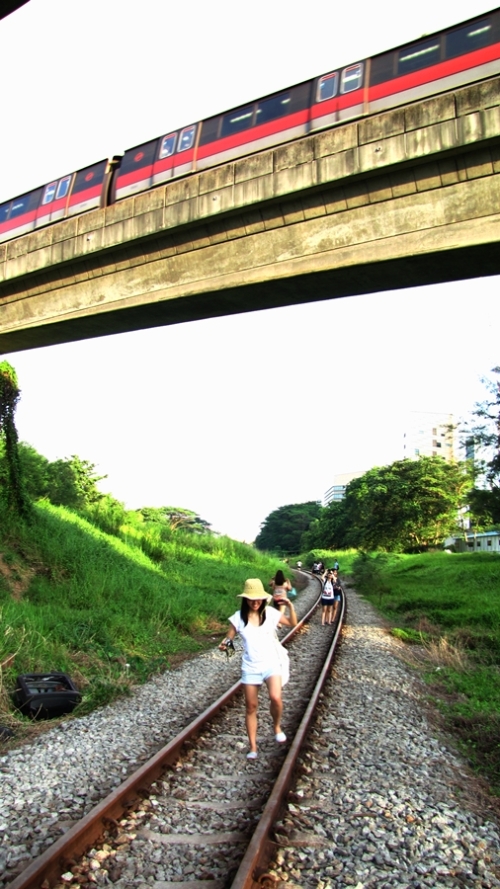 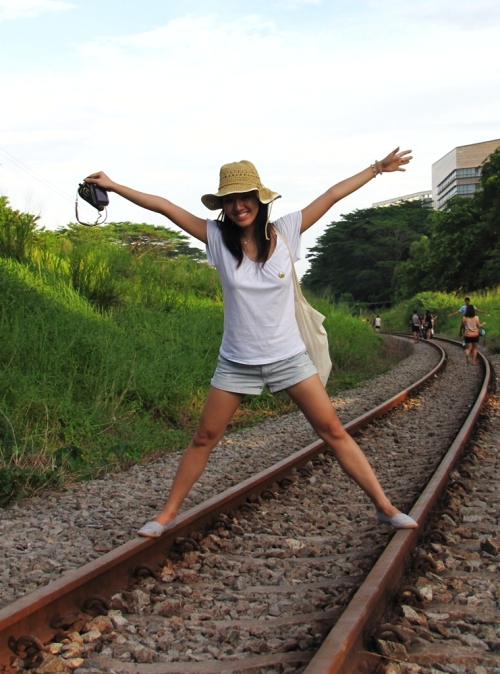 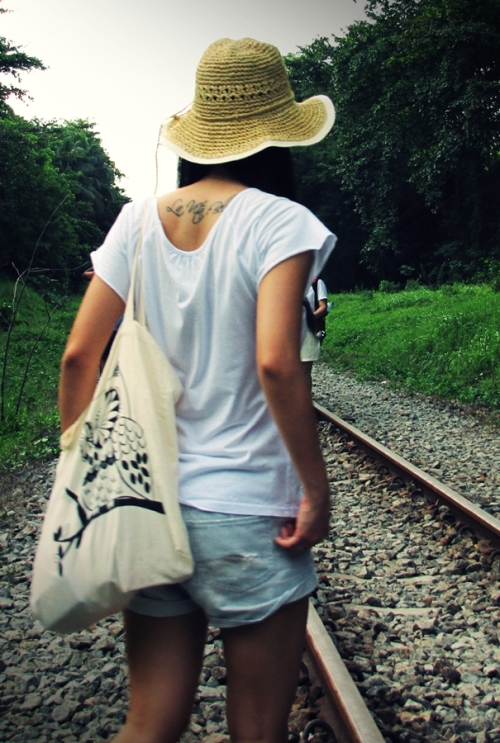 Posted in About Singapore 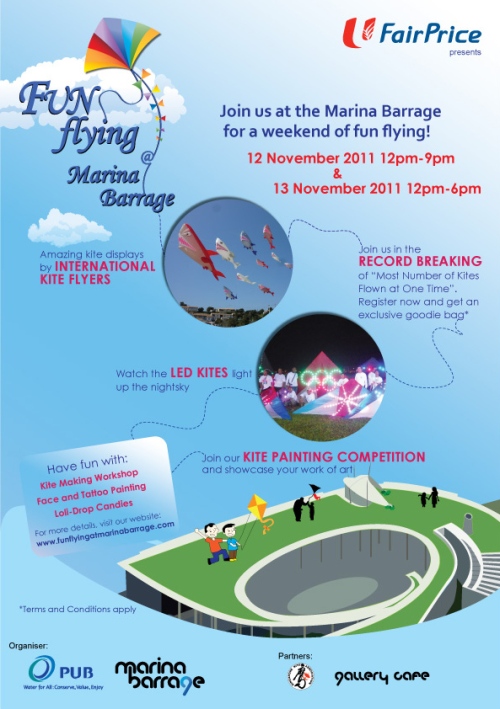 Looking for something exciting to do this weekend? Why not gather your family and head down to Marina Barrage for a fun-filled weekend of kite-flying?

Enjoy free kite making workshops using recycled materials or let the international kite flyers wow you with their amazing kite displays! Be part of a record-breaking event for the most number of kites flown at one time!

Posted in About Singapore

Started our meal with a cup of refreshing Honey Ginseng Tea (the Chinese equivalent to Amuse Bouche) to cleanse our palette so that it will be easier for us to appreciate the distinct flavours of the multi-course meal.

The auspicious Pen Cai (also know as 盆菜 in Mandarin) is 1 of the most popular Chinese dishes for families during the Chinese New Year reunion dinner. It is, essentially, a pot filled with premium food

bearing auspicious meanings (black moss signifying wealth; dried oyster indicating happy news). As such, there is no better way to usher in the Lunar New Year than to feast on this pot of Pen Cai together with your family and receive good blessings and happiness for the year ahead.Stewed to perfection, the Pen Cai from Crystal Jade was extremely tasty and a gastronomic delight! Costing just under $500 for this pot of Pen Cai (which can feed up to 10 pax), this dish doesn’t come cheap but considering the fact that it is brimming with delicacies and all the goodness, it is definitely worth the money for the yearly affair. 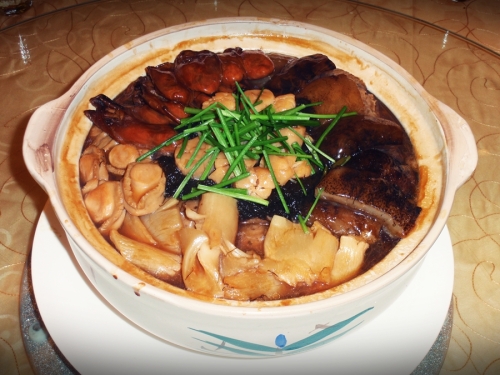 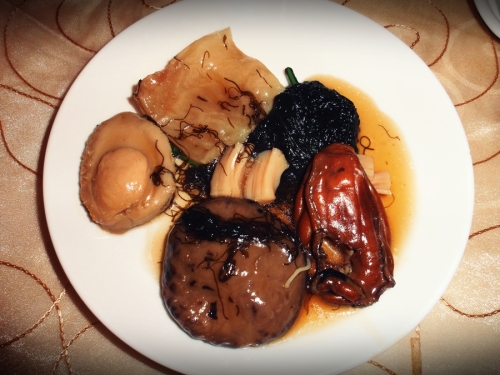 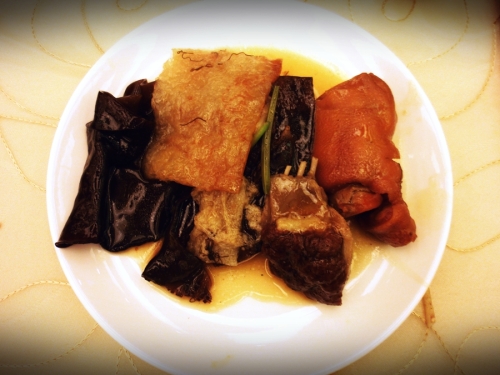 Catch the renown Chefs in action

Those who know me well enough would know that I’m a sucker for sliced fish soup! To many, they wouldn’t be caught having a bowl of sliced fish soup
unless they were sick (aka a “sick food”). Well, they might just change their minds after tasting this bowl of sliced fish that was cooked to perfection right in front of our eyes. The soup was flavourful from all the wholesome goodness that has been boiled over several hours.

As the name states, this dish is made up of 8 different ingredients (all carrying auspicious significance). 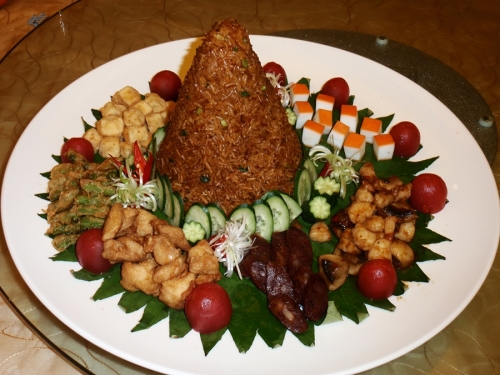 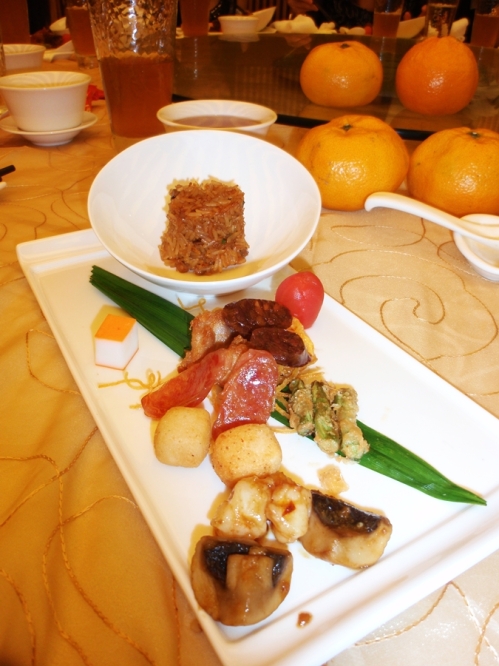 Having visited many Chinese restaurants, I must admit that this was the very first time that I’m actually seeing a Western-influenced dish in an Oriental restaurant! The dessert was served in a fashion that’s very similar to what you might expect in a tasting menu at French and Italian restaurants. At one end, we have a “hot” dish – A sesame ball filled with custard; One the other side, we have a “cold” dish – An exotic fusion of Pulot Hitam and fruits. Yin-Yang combi, a stimulating sensory dessert for our taste buds! 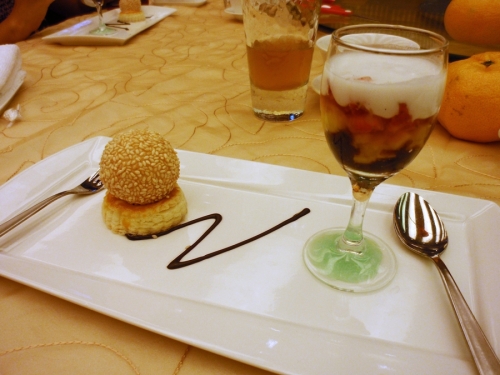 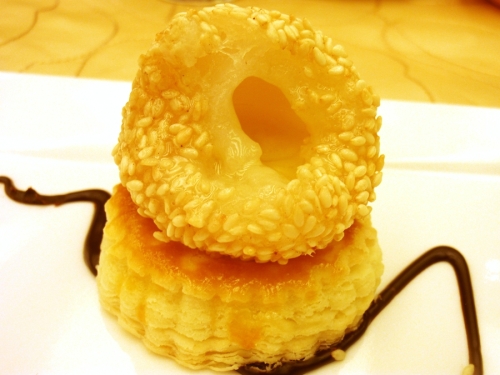 My new found tasting buddy, fellow blogger Jeanine and me

Feasting aside, trust OMY and Wanbao to come up with a range of interactive activities (competitions and games) to keep the crowd going! We were encouraged to let our imagination run wild and get creative during the lantern making competition, which brought back memories of my primary school years! 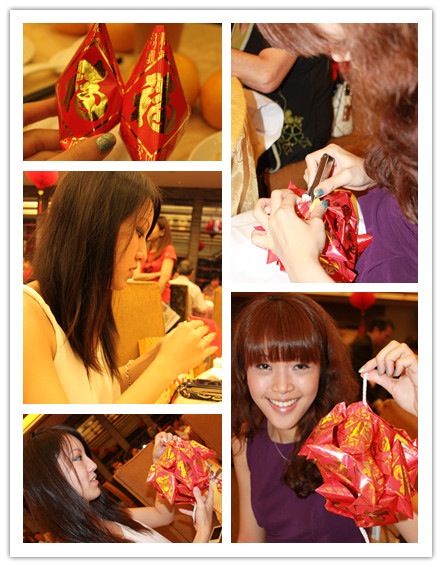 Jeanine with our super impromptu hand-made “DURIAN” lantern. Honestly, we were pretty clueless about making a lantern (as you can tell, I didn’t pay attention during my Primary school arts & craft classes! lol) and were simply sticking the red packets together to form something. Truth to be told, we were almost embarrassed to parade our ridiculously shaped lantern on-stage when we took a quick glance at everyone else’s beautiful lanterns. Nonetheless, Jeanine managed to convince the judges that we are true blood Singaporeans as our lantern is designed after a durian thus giving it a unique design. Creativity rules and in the end, we won the 2nd spot! Can you believe that? We were speechless!

Now that we were done with our CNY feast, it was time to bask in the Christmas atmosphere at Swissotel Merchant Court! Party poppers!! 🙂 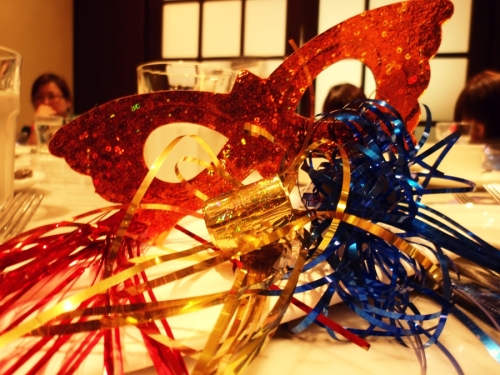 Starting our Christmas meal with a fruit salad. An interesting mix of vegetables and fruits (pears, strawberries & raspberries) with honey roasted walnuts (love them!). An ideal dish for the health and weight conscious!

What’s a Christmas meal without turkey?
We were served a dish of turkey with cranberry & apricot stuffing for our main course. 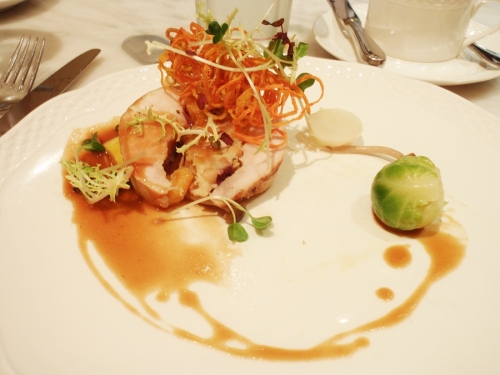 Love the fact that the kitchen crew had gone the extra mile to decorate the dish with garnishes like these carved carrot & radish. 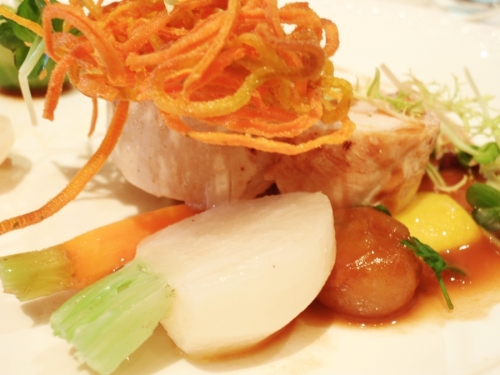 All things must end with something sweet
Fruit cake, served with a scoop of Vanilla ice cream 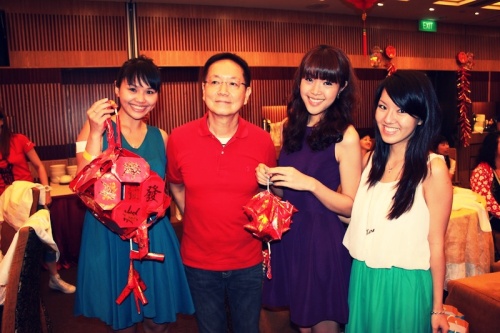 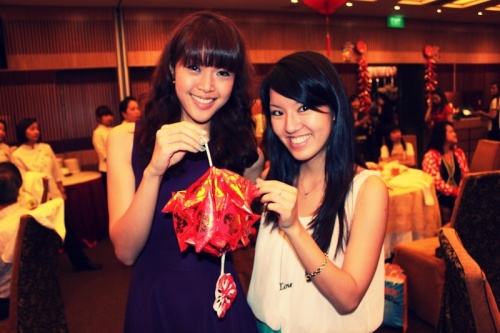 * Both group pics credit to Jeanine

Want to savour an array of mouth-watering dishes at a deal? Well, you’re in luck! Over the next few Saturdays, veteran food writer, Ah Lun, will be bringing a group of foodies to sample Christmas and Chinese New Year festive cuisines at several famous restaurants – From Sze Chuan Court @ Fairmount Hotel to Mandarin Hotel.

Upcoming Sessions for the month of November

* Thanks to Alvin from OMY and Wanbao for extending this invitation to me to join them on this special festive food trail! 🙂

Posted in About Singapore, Blogging, food

Now that I’m a month into my new role at work, the initial anxiety has eased and I’m slowly but definitely settling down in my new job. With a change in responsibilities, it’s inevitable that many friends and colleagues have been asking if I’m coping well with my new portfolio. There’s no denying that I am certainly in a better place and that I am finally getting a sense of job satisfaction. After all, nobody should work in a job that they dislike (in theory). Sure, my current position isn’t my ideal dream job (yet, does this dream job ever exists?) but it provides me with the appropriate skill set that I need in order to pursue a career in the long run. Grateful for this opportunity to learn and grow and not simply exist in the company.

Having said that, I was recently hit by the age old dilemma of money vs satisfaction. Of late, a handful of my peers have received relatively good pay increment – be it through a change of jobs or a promotion – and while I do earn a decent amount, I cannot help but feel that I need to “up” my game in order to “catch up”. Our society has always associate success at work to a higher paycheck and the competitive streak in me has made it difficult for me to let go of the  predisposed fear of “losing out”.

Time and again, I try to convince myself that work is not and should not revolve around money. Had money been the main motivation, I should have gone into sales or property, both of which are lucrative industries for making big bucks. But I know, at the end of the day, that’s not what I want. It’s an internal battle that I’ve been struggling with – The pressure to meet the societal standard of “being successful”. This is particularly so when relatives/people from the older generation start comparing the salaries and job status of their children among one another. Oh my god. I bet this is a typical scenario that many of you have faced, especially during family gatherings! On this note, I must admit that I’m very blessed to have cool parents who do not engage in such conversations so it does take the pressure off me to live up to the expectations of parents.

I read from somewhere that money and success cannot remain elusive. Of course, it will be perfect if I am able to find the common ground between making money and finding job satisfaction. However, more importantly, I will need to stop inflicting unnecessary pressure on myself and learn to let go of this self-imposed fear of “losing out”. For this fear might possibly permeate into the other aspects of my life. Then, it will be even harder for me to get out of this “trap”.

Posted in Life, Me, Myself & I

. luxury at your finger tips .

I was looking at my collection of pictures taken through my schooling years when the section on Prom Night caught my attention. Those were the days when my girlfriends and I would eagerly experiment with make-up and indulge in retail therapy so that we can look our absolute best for the very special occasion. Such a celebration, however, came with a hefty price as I (or rather, my parents) blew hundreds of dollars just to get the perfect dress, shoes and accessories – The look had to be perfect. Come to think of it, I still do have the 2 pieces of gowns that I wore for my Secondary School & JC prom nights in my closet … Tucked in a corner and hardly worn. In fact, seeing how I keep purchasing new clothes these days, I doubt that I would ever be wearing those dresses anytime soon.

Does this scenario sound similar? Well, lucky for you folks, the creative brains behind DRESS SENSE have made it extremely convenient for ordinary folks like us to don a celebrity-studded/branded gown for only a fraction of its price.

Multi-label boutique, DRESS SENSE is one of the pioneers to introduce the “Rent A Dress” concept locally. Renting a dress is as simple as ABC. Once the perfect dress has caught your eye, rent it from DRESS SENSE at a fraction of its price and have as much fun dolling yourself up with it for 2 weeks! Love the dress so much that you are finding it a challenge to part with it? Well, you’re in luck as DRESS SENSE also gives you the option of buying the dress! DRESS SENSE also carries bags and jewellery for rent/purchase to match your perfect dress! 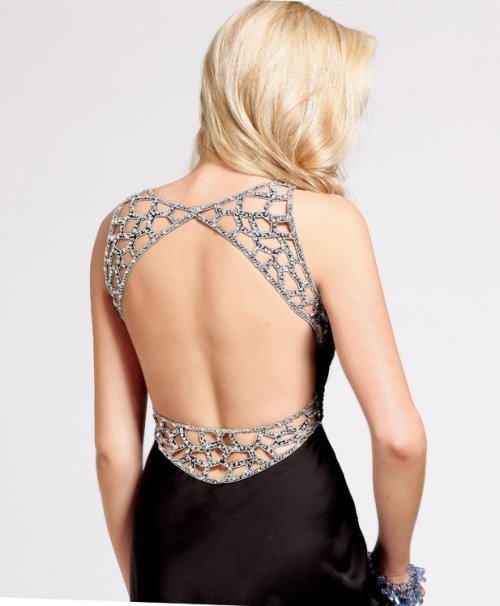 Dressing up has never been so effortless and guilt-free!
Visit Dress Sense at Raffles City Shopping Centre, #03-29A now! 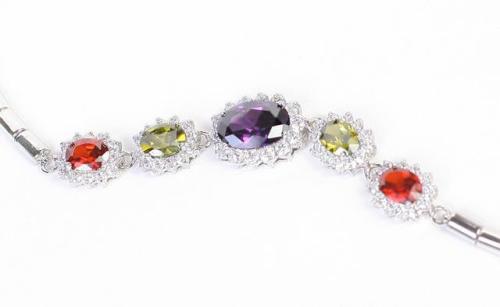 Posted in About Singapore, Blogging

Posted in You, Me, Us